The conference venue is at the the Undergraduate Centre, Otakaari 1, 02150 Espoo. Credit: Mikko Raskinen. 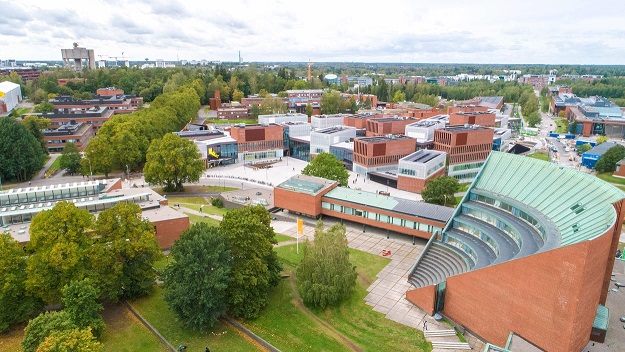 Helsinki is the capital, primate, and most populous city of Finland. Together with the cities of Espoo, Vantaa, and Kauniainen (and surrounding commuter towns, including the eastern neighboring municipality of Sipoo), Helsinki forms the Greater Helsinki metropolitan area. Helsinki, the sustainable capital of Finland, is a vibrant seaside city of beautiful islands and great green urban areas. Helsinki marches to a wonderful and unique beat of its own with dynamic food, design, architecture — and sauna! — scenes. Helsinki and its Nordic culture are made by the locals.
Helsinki is the largest city in Finland and the metropolitan area is the home of 1.4 million people. When you look at a map, Helsinki is in the northernmost corner of the Europe but it is an easy hub to reach with fast flight connections from East to West. No flight? No problem. Helsinki can be reached from St. Petersburg, Estonia and Sweden via the Baltic Sea. In fact, the sea is one of the most characterizing elements of the city. The Helsinki Archipelago consists of over 300 mesmerizing islands.
The rhythm of Helsinki is laid-back and the city is easily approachable, literally. The public transportation system is one of the best in the world — with that one beautiful metro line — and it is also easy to walk and bike everywhere.
In addition to Helsinki, the capital region is made of a hub of other interesting cities and sights to visit. These include the neighboring cities of Espoo and Vantaa, the historical town of Porvoo, Järvenpää-Tuusula area — famous for its artistic heritage — as well as the ironwork villages west of Helsinki. There are 6 national parks less than 2 hours away from Helsinki and countless other nature sites to visit. Venture out to the forest, enjoy a concert, flow to a festival, enjoy a Nordic dinner or try one of those iconic public saunas — it's all here.
Visiting Helsinki
Banner photo: Panorama Of Helsinki (Credit: bearinthenorth at Pixabay)